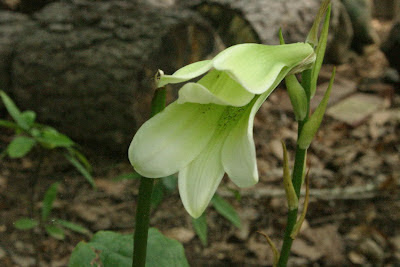 This odd Japanese woodlander is blooming here for the third time this year. It first bloomed in 2000, then again in 2004. As Cardiocrinum go, this species is a small one: my plant is evidently the typical form, Cardiocrinum c. cordatum. It has never been more than about thirty inches tall when in bloom. The northern subspecies glehnii is apparently taller.

So far, the flowers have never opened here any more than what can be seen in the image above. The three upper tepals are separated from the three lower tepals by a long opening along the side of the blossom. This reminds me of the mouth of a hand puppet or the beaks of ducks and geese: I almost expect to hear these flowers quacking or honking at me.

That this plant has proven to be so easy to grow comes as a surprise: why has it taken so long for this species to be introduced to our garden flora? That the Chinese species have remained obscure is understandable. But surely you would think that someone along the way would have introduced this Japanese species.

This plant has a very odd growth cycle. The foliage emerges in late winter or earliest spring. It remains huddled on the ground until early June. At this phase it suggests a clump of skunk cabbage. Then in early June the annual stem of plants which will bloom begins to elongate under the foliage; this elongation lifts the false whorl of foliage up about a foot or more above ground. At this stage it looks like a hosta on a stick. Then sometime in late June the annual stem begins to elongate above the false whorl of leaves: this elongation eventually develops into the inflorescence.

As I've grown it here, it has always been few-flowered, with two or three flowers per inflorescence. But the sweetly scented flowers are big: each is about seven inches long.

One of these days I hope to have a nice group of these.
Posted by McWort at 11:13 AM