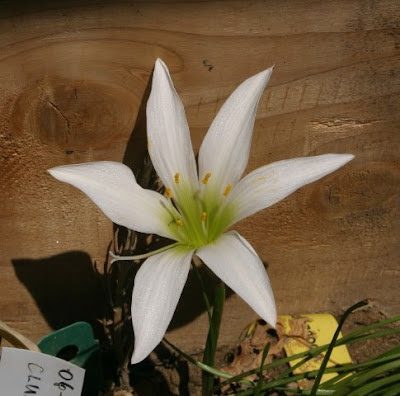 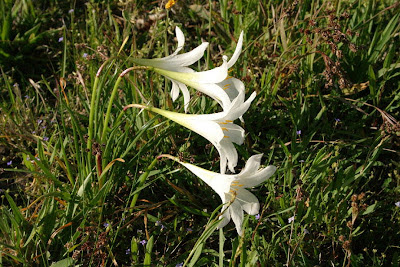 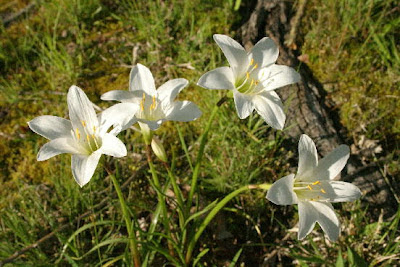 This is the native Zephyranthes atamasco. The upper image shows it blooming in the protected cold frame. The lower images show it blooming very beautifully along the road side in northern North Carolina. My friend Mary and her artist friend John and I were on our way to visit a famous garden in the area. Traveling with keen gardeners/botanists can be an occasionally harrowing experience, as when one quickly slows the car and veers off the road to park, all the while yelling the name of some plant. Only confirmed birders are worse. In our case, the plant was spotted on the trip down; we were sensible enough to postpone the pullover for the trip back.
Until a few years ago I did not realize that this was a native plant (in the sense "native to Maryland"). A seemingly wild population turned up about twenty years ago on the Eastern Shore.
The name of the plant has appeared in some publications recently as Zephyranthes atamasca (rather than atamasco). The explanation for this is long and convoluted, but the simple version is that Linnaeus published the name Amaryllis atamasca for this plant. That is almost certainly either a typo for Amaryllis atamasco or a failure on the part of Linnaeus to recognize that the word atamasco is a noun, not an adjective. The word atamasco, or variants of it, had been in use for a century and a half before Linnaeus. If authors other than Linnaeus have used atamasca, I'm not aware of it. Phillip Miller, the Linnaeus of gardening, spelled the word with a final o, although there are seeming typos in his account also.
Unlike most of the neotropical members of the genus, this species flowers in mid-winter through early spring, depending on location. I've seen it growing as a lawn weed in parched, hardscrabble, run down southern towns and also growing out the sphagnum moss of roadside bogs. If there is no rain, it simply remains dormant from year to year. The plants in my protected cold frame did this: they got little if any water during the summer, and the time came when they simply no longer appeared above ground at all. After an absence of nearly two seasons, I dug them out. The bulbs had shrunk down to the size of peas, but otherwise seemed sound. I planted them in a pot with some bog plants - and a week later the first foliage began to appear.
Posted by McWort at 1:33 PM

I just started growing these in my bog garden, and haven't had nearly the luck that I do with Z. candida.

To avoid losing them entirely, I potted some up and brought them in under the florescents. Still nothing until I gave them so Holly Tone, after which they've suddenly burst into new growth.