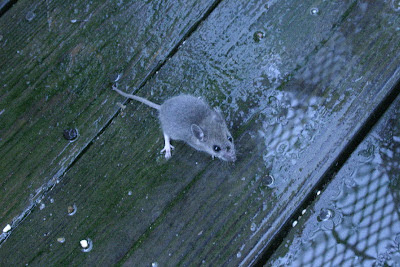 The other day while sitting in the kitchen reading the paper and absentmindedly nibbling on something I heard a noise in the house. It's summer, and all the doors and windows were open to let in the cool morning air. At first it sounded as if a bird had come into the house; that happens occasionally, and the bird usually turns out to be either a wren, a starling or an appropriately-named house sparrow. The sound seemed to have both a fluttering quality and a ventriloqual quality - at least in the sense that I was having trouble deciding where it was coming from. When I got up to investigate, the sound would continue for a moment, then stop. At one point I went down to the basement to see if something was caught in the curtains over the door (which happen to be just under the spot where I had been sitting). Eventually, by triangulating the sound, I narrowed it down to a spot where there were a pile of papers and a bag of bird seed. The bird seed was the obvious candidate, so I boldly scooped through the seed to see if anything was in there. For a moment I thought I felt something lumpy pass through my fingers - but there was no subsequent movement. Then I investigated the pile of papers: nothing there either. Suddenly, the sound started again. And this time, there was no mistaking that it was coming from the bag of bird seed. I began to think insect: surely, no mammal or bird would be so oblivious to the nearby presence of the master predator.

Without touching the bird seed bag, I peeped into the bag: there it was, quivering at the edge of the bag. It was a young deer mouse, almost full grown but evidently not yet old enough to have learned how the world works. I got a glass jar and gently scooped it out. Camera in hand, I took it outside to get some photos. But while I was fooling with the camera, the little mouse got out of the jar. I was out on the deck, using the wire-mesh table there as a work surface. The mouse stopped as soon as it touched the table top: the table was wet from the last night's rain. Although I was standing only about a foot away, the mouse began to lick rain drops from the wire mesh. Then it made a sudden dash to the underside of the mesh grid and continued to drink.

I got a few pictures, but the mouse was hardly posed as I wanted. Then I watched it scamper off to the far side of the deck - whence it no doubt eventually made its way back into the house.