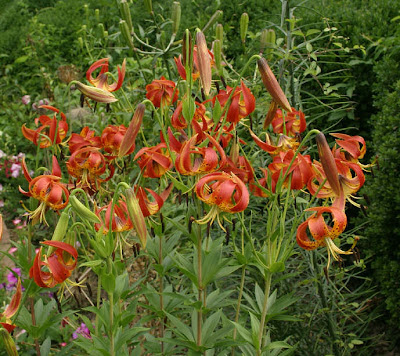 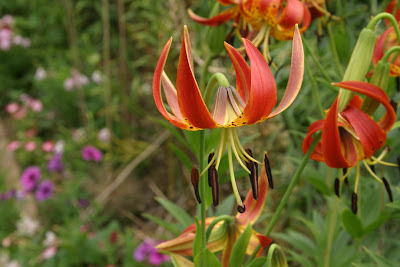 Lilium superbum, which still grows wild here in the greater Washington, D.C. area, is blooming now in the garden. How is it that this lily, which is one of the most spectacular of all lilies, is so rarely seen in local gardens? Even in my circle of lily-growing friends, it's all but unknown.
In the wild it is generally associated with water in some way. I've seen it on floodplains, along streams or drainage ditches, in steeply sloping seepage areas in the mountains, once even growing right out of the flowing water of a stream. But water is not necessary for it: I've also seen it growing in dry, sun-baked fields. If nothing else, it's adaptable. Plants in deep shade are sometimes six or more feet high - and often have but three or four blooms. Plants in sunny sites are apt to be shorter but with more flowers. The usual flower color is a vivid orange, but plants with a strong red suffusion such as the one shown above are not uncommon in some areas.
Another native lily, Lilium canadense, seems to have been known to English gardeners as early as the early seventeenth century. But Lilium superbum, a much grander and more conspicuous plant, was evidently not recorded in England as a living plant until about a century later.
Add my name to the long list of commentators who have been puzzled by the low regard in which we hold our native flora.

I grow both it and L. canadense.

They take a few years to establish but once they do... wow!

Lonnie, where do you live and garden?