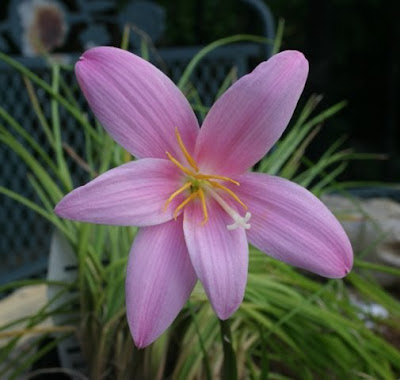 Throughout those warmer parts of the New World which are characterized by periodic droughts, the native amaryllids have developed the ability to bloom opportunistically in response to rain. When I was in the Army forty years ago stationed in central Texas, I had the chance to witness the flowering of the rain lilies on many occasions. It's really charming: a day or two after a deluge the ground would be spangled with egg-sized flowers bobbing and swaying over the ground on foot-high stalks. Some of them were deliciously fragrant at night.

The name rain lily might be a misnomer: there is controversy about exactly what it is which triggers bloom in these plants. The plant shown above is Zephyranthes grandiflora, and it spent the winter in full leaf in the protected cold frame. That cold frame is covered during the summer to keep rain out: most of the plants in the frame are summer dormant plants which do not tolerate summer wet. Although the Zephyranthes was not moistened by the recent rains, it did bloom with the rains. It surprised me to see this plant blooming from a clod of hard, dry clay.

Zephyranthes grandiflora is one of the commonest and least expensive members of the genus in cultivation. It's one of those plants which has a cult-like following. Once you learn how to cultivate it, and you have built your stocks up to dozens or hundreds of bulbs, you can count on them to put on an impressive mass display yearly. It's not reliably hardy here, but it takes very well to container culture. When I first wrote that I wrote "pot culture". But as often as not, the prolific bulbs end up in some improvised, bigger container. During the cold part of the year simply store the entire container - bulbs, soil and all - dry in the basement.

There are other Zephyranthes in the collection here, including the Maryland native Z. atamasco. The flowers of all of these are of such fleeting duration that they always catch me by surprise. One day they are not there, the next day they are. Individual flowers last only for about two and a half days.
Posted by McWort at 1:11 PM