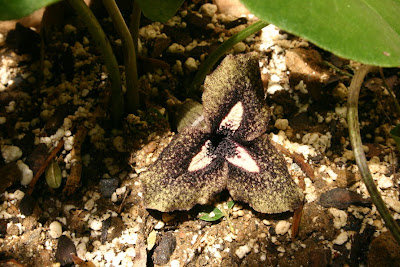 Gross, repellent, bizarre: there is something of all three about the flowers of the members of the genus Asarum. The fact that some members of the genus are pollinated by slugs hardly adds to their allure. But they do have allure, and it’s mostly derived from their handsome, often evergreen, foliage. The flower shown here is that of Asarum nobilissimum, one of the larger, marginally hardy forms. It grows in the protected cold frame here, and seems to be taking well to life there.

The evergreen asarums would seem to be a boon for our gardens, but I have not found them to be reliable for winter interest in our climate. Some species, notably the European Asarum europaeum, although technically evergreen, collapse during the winter: the foliage becomes thin and papery and lies flat on the ground. The foliage of other evergreen species seems to be easily damaged by below freezing temperatures if not covered by a protective mulch of some sort.

In the garden of my dreams I have them growing in an extensive battery of cold frames where throughout the winter their handsome foliage will be snug under the glass yet still plainly visible to the gardener.

Those species with deciduous foliage generally are much better garden plants in my experience. The common local species is Asarum canadense, generally if misleadingly called wild ginger (it’s not related to gingers in the botanical sense; the dried roots have been used as a ginger substitute).

Several of the other evergreen species from the southeastern United States are in commerce, but as a group they don’t seem to have caught on outside of the always acquisitive coterie of most enthusiastic gardeners.

It's very unpleasant to hear so many American speakers pronounce this name a-ZAR-um. Historically, the stress has been on the first syllable. Years ago I was very happy to hear an Italian gardener refer to the plants as A-sa-ro, with the stress on the initial A: that's where it has presumably been since before the days when Latin was morphing into Italian.
Posted by McWort at 10:46 AM