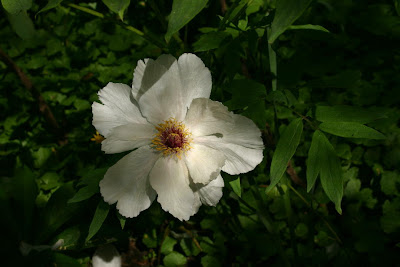 The first peony to open here this year was Paeonia mascula. It was followed almost immediately by three others: a white-flowered Chinese tree peony with no name (one of their utility grade peonies grown for the medicinal bark), a peony long-grown here under the dubious name P. arietina, and the little hybrid ‘Early Scout’. By now, several garden tree peonies have also joined the party.

These earliest peonies bloom when the garden is at its most tender, freshest best. There are dogwoods, redbuds, tulips, wisteria, phlox, daffodils, and a bewildering array of minor players; the foliage of the trees is still tiny and pale green, giving a magical greenish haze while allowing in plenty of light.

Little by little the migratory birds are reappearing. I sat on Wayne’s patio the other morning listening to a wood thrush and watching two male hummingbirds trying to boss each other around at the feeder. The first towhee of the year appeared on the patio the other day. The dawn choruses of birds are at their best: strong and varied and urging the sleepy-headed gardener to get out of bed and get going. The chortling of woodpeckers is now an oft repeated part of the daytime bird sound: are they poking fun at me?

Bird song is not the only aural entertainment on the air now: toads continue to call at the ponds. The call of the local toads is very soothing on the sort of nights we’re having now, nights which suggest July rather than April.

What a year: we’re just out of the first full week of spring, and the weather is saying summer. In response to this, there is another less pleasant sound now demanding attention: the whine and whirring of air conditioners has already started: what are those people thinking?
Posted by McWort at 10:26 AM