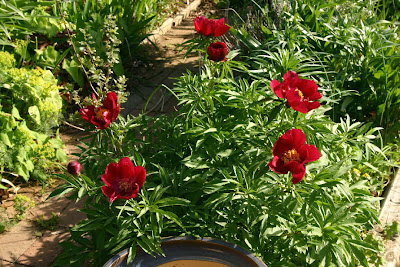 This handsome early-flowering peony has been in the garden for decades. But for most of that time it rarely bloomed; in fact, it came close to dwindling away. As the back garden became shadier over the years, several once flourishing plants began to slowly decline – among them was this otherwise fine peony.

‘Early Scout’ is a hybrid of Paeonia lactiflora ‘Richard Carvel’ and an unnamed form of P. tenuifolia. It was raised by Edwin Auten Jr. and presented in 1952 (this from The Peonies edited by John Wister). It’s been a reliable grower and bloomer here, and it’s among the first of the peonies to bloom each year. The flowers are small as garden peonies go, but at their early season they are not in competition with the big garden peonies.

The plant is worth having for its foliage alone: long after the flowers have gone the mound of finely cut foliage remains handsome and distinctive.
Posted by McWort at 10:44 AM