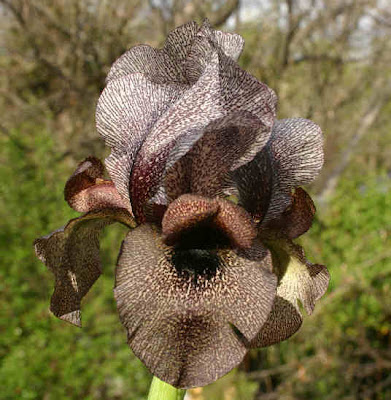 Words fail me on this one, so I'll let Reginald Farrer take it: "They are a doomed and lonely race of irreconcilable Troades in weeds of silken crape, sullenly and grandly unresigned to exile and captivity, passing out of their captor's hands in a last defiant blaze of dark and tragic magnificence. They are chief mourners in their own funeral-pomps, wistful and sombre and royal in an unearthly beauty of their own, native to the Syrian hills that have seen the birth of gods, but strange and hostile to the cruder colder lands. They are the maidens that went down into hell with Persephone, and yearly in her train they return to make a carpet for her feet across the limestones of the Levant. But not for ours - their loyalty to their mistress holds only good in Syria; they do not recognise her in the rain-cloaks that she wears in the West, and lands of younger divinities shall never twice re-greet such children of mystery as these."

Nobody does purple as well as Farrer! And let's hope that his "lands of younger divinities shall never twice re-greet such children of mystery as these", appropriate as it might have been for Farrer's Scotland, finds an exception here in warm, sunny Maryland.

And so what is the glorious creation shown above? She is a hybrid of Iris kirkwoodii and Iris hermona, two oncocyclus irises. The internet bulb forum friend who raised it from seed sent me a piece last fall; if he reads this, I hope he realizes that my not mentioning his name is an act of kindness on my part, not one of ingratitude. How, indeed, does one express gratitude for such largess?

A brown iris..definately a conversation piece! Like my black tulip that a friend stole one night.Am enjoying your flower gardening blog. With all the rainfall we've had over the past few months, my purple verbena looks like it might have mildew or a blight. Any problems from all the rainfall we've had? I also live in Montgomery County, Norbeck area. Came across your website browsing for local flower gardens