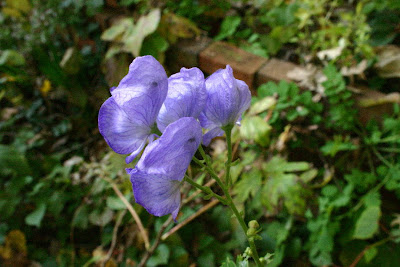 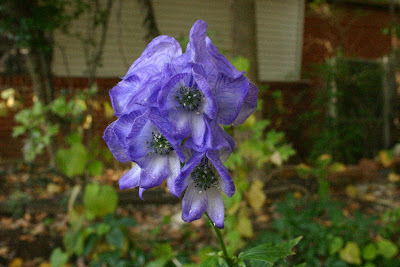 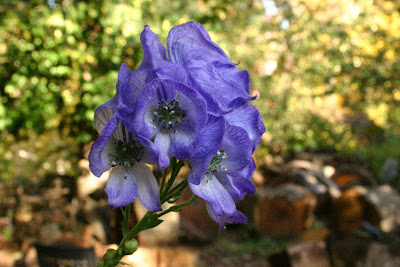 Late blooming plants are always welcome in this garden, not only because they extend the season so nicely, but also because my birthday occurs in late October. I think of these plants as blooming to help celebrate my birthday. The one shown here is Aconitum carmichaelii (it has other names) and is one of the few members of its genus which really thrives under our conditions. The small cluster of blooms is hardly in proportion to the five foot stems; on the other hand, if the flowers are cut for the house, most of the stem can be left on the plant.

This plant is one of several I brought from an abandoned nursery over thirty years ago. A friend and I were taking a bicycle tour of rural parts of the county, and we passed a recently abandoned nursery. This place was a real nursery where the plants sold were actually grown on the site; contrast that to the retail "nurseries" which most of us now know where plants are brought in and sold like dry goods.
The nursery was called Perennial Place, and I eventually met a relative of the former owners. She invited me to help myself to the plants which were left. The plants were all growing in the ground, each type in a bed of its own of several square yards extent. This was before the big boom in perennial plants in the 1980s, the boom which brought a bewildering array of plants into our gardens - at least briefly.
At Perennial Place I remember seeing in particular autumn anemones, epimediums, hostas and this aconite. I returned later with the car and dug and hauled as much as I could. The place was about to be razed, utterly obliterated. I drove by years later and could not even identify the site of the former nursery with certainty.
This abandoned nursery made a profound impression on me: I still dream about that place, and I daydream about the things which I saw there, things which only another gardener would notice or understand.
Posted by McWort at 2:12 PM