This one didn't make it 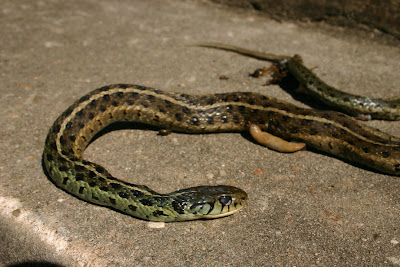 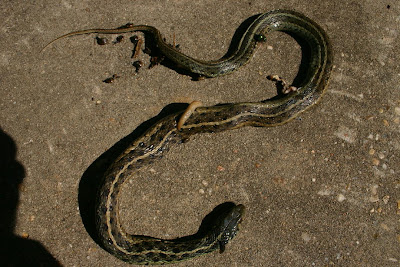 It's a sad fact that wild animals in an urban setting are more likely to be seen dead than alive. I've gotten used to this, more or less. But I still get upset when I find animals dead on the road, especially close to home. The local populations of small terrestrial vertebrates must be under relentless pressure from cats and cars.

Two days ago, as I was getting into my car (which was parked in front of the house), I noticed something familiar in the street only a few feet away: it was a dead eastern garter snake, a mature male. I see garter snakes in the garden most years, especially in the early spring and early autumn, the two seasons when cool nights followed by warm days bring the snakes out to bask in the sun.
The death of an adult snake means that years of feeding and growth are for naught. Garter snakes are however prolific and give birth to (sometimes) dozens of live young. I can only hope that some of them are lurking back in the garden now.
Too bad they can't be trained not to cross the streets: when they do, they don't have much of a chance around here.
In the images above you see not only the dead snake but also some members of the clean-up crew which quickly took advantage of the situation.
Posted by McWort at 2:14 PM