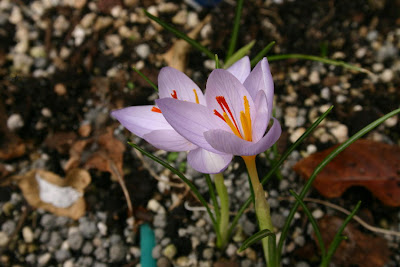 Most gardeners seem to be vaguely aware that autumn crocuses exist, but few seem to realize that they have a long season of bloom; in mild years they bloom right up into the season of the earliest of what we usually think of as winter blooming crocuses. Some forms, such as Crocus laevigatus, have forms which seem to straddle the distinction we try to make between autumn and winter flowering crocuses. With a bit of cold frame protection, it’s possible to have an unbroken succession of crocuses of various sorts in flower from late September until well into February or early March.

The one shown here, Crocus longiflorus, has long been a favorite here. It’s known for its fragrance, a quality it shares with many other crocuses. Fifty years ago, when I was first learning my crocuses, this plant was not readily available, and my eventual acquisition of a few corms was a highlight of my gardening year at the time. At the time I grew Crocus speciosus, C. sativus and C. kotschyanus; I regarded the acquisition of C. longiflorus as a big step into the seemingly ever widening world of lesser known crocuses.
Posted by McWort at 2:02 PM

Hallo, I started growing Crocus Longiflorus same year ago. Now I would like to grow other Crocus as you did for having the longest flowering season. Can you help me find bulbs? I live in Italy