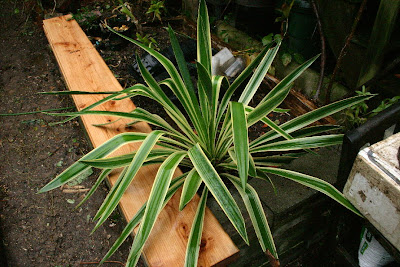 As a rule, variegated plants do not do much for me: I can take them or leave them. Many of them have the look of virus infected plants. Yet some of them certainly have just the combination of novelty and beauty to not only catch your eye but to bring on a real bout of acquisitiveness. The variegated yucca is one which caught my eye and came home with me years ago. I had just dug out a long established clump of a non-variegated yucca, Yucca flaccida. That experience should have warned me off yuccas forever. Why in the world did I bring another one into the garden?

The variegated yucca (if it has a formal name, I don't know it) seen in the image above has grown on me over the years. It's one of those plants which looks about the same year round. In fact, it might as well be made of plastic. It always looks clean and fresh: it does not have a down season. The foliage sometimes shows tints of pink in addition to the green and the white. About the only change to be noticed is that it slowly grows bigger each year.

It's also long suffering: until this week, it had spent most of the summer hidden under a dense blanket of porcelain berry vine. When I freed it of its oppressive mantle, I had to admit that it was unexpectedly handsome and hale. It's a keeper.
Posted by McWort at 10:11 PM