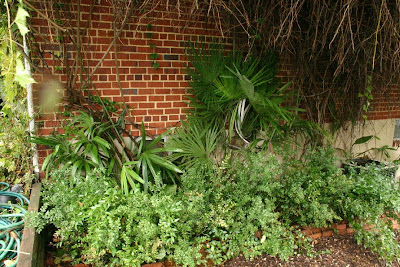 The image above shows what I jokingly call my palm grove. Two species of palm are shown: Trachycarpus fortunei and Rhapidophyllum hystrix. The former is native to western China and the latter comes from the southeastern US. In our climate Rhapidophyllum is widely regarded as the hardiest palm.
I first tried the Trachycarpus nearly forty years ago. That first plant survived for many years but eventually was lost in a particularly bad winter. A second trial did not last as long. The current plant in now bigger than any of its predecessors, big enough to be handsome and attract attention - and big enough to be vulnerable to a bad winter. Trachycarpus is easily protected with a pile of leaves when it is young, but once the trunk emerges from the ground there are basically two choices: elaborate protection or taking chances with an unprotected plant. I have not made any effort to protect the plant in the image above for years, and it's doing well. But recent winters have been abnormally mild.
The Rhapidophyllum is a more recent addition to the garden. It has never been protected during the winter.
The companion plants in the foreground are interesting, too. Most of what you see are Ruscus aculeatus, the European butcher's broom. Mixed among them are one of its close relatives, Danaë racemosa, the Alexandrian laurel. Most people are surprised to hear that both of these plants are monocots related to asparagus. I'm also sometimes asked why I write Danaë with two little dots over the e. Those two little dots (the dieresis) indicate that the a and the e are to be pronounced separately; in other words, it's a three syllable word.
This planting is one of those groupings which changes very little from season to season: other than the bright red fruits of the Ruscus and the Danaë during the winter, what you see here is what you will see at any time of year. These plants are now large enough that I might give in to the temptation to raid these plants for winter greens for the house. There is a long tradition of using both the Ruscus and the Danaë for that purpose, and there is an international trade in the cut branches. To this day I occasionally see branches of Danaë (with the fruits removed) in local butcher's cases. The Ruscus most often appears dried and spray painted for holiday decorations. It's a firm, even hard, spiky plant when alive and growing; when dried it is especially disagreeable.
Posted by McWort at 12:41 PM