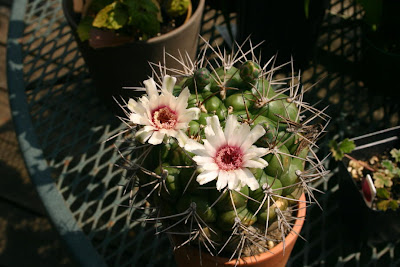 The other day I was in a big box store and noticed some trays of those Canadian grown cactuses and succulents. Many of them had been stuck with dried flowers of straw flowers (Helichrysum). This gives a fair imitation of a cactus in bloom, and for me it brought back memories of the baby turtles with painted shells which were sold in all the five and dime stores when I was a kid. There was muffled outrage against this back then, but the practice continued. It took a "medical excuse" to get the job done: once baby turtles were publicized as a potential source of salmonella infections, they disappeared from the stores. The fate of the turtles has probably not changed much: you don't see the baby ones sold en masse  for pets anymore, but neither do you see the thousands trapped in the summer or dredged from the mud in the winter and exported  to Asian stew pots.

But now back to those Canadian cactuses: as I glanced over them, I noticed that one or two actually had genuine flowers. When I was a kid, the flowering of a cactus was viewed as a near miracle.

In the image above is one of the so-called chin cactuses, members of the genus Gymnocalycium. I have no idea which one this is, and I’ve had it for so long – easily twenty-five years – that I don’t even remember where I got it. This might be the first time this one has bloomed.


Generally speaking, I don’t do well with houseplants. Some begonias and selaginellas in big glass jars have survived for decades, and several cactuses and other succulents have hung on since who knows when. There are several exceptions, but typical houseplants don’t have a chance here as a rule.
Posted by McWort at 6:21 PM

I have a friend who bought one of those baby turtles that's now all gown up into a handsome, red eared slider. I've caught several, usually, as crossing-the-road-turtles.