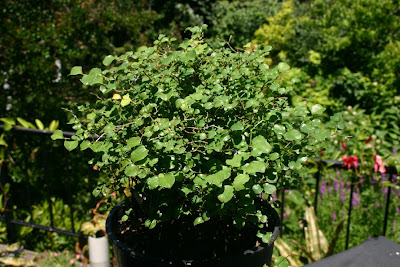 Are there any other smilax enthusiasts out there? In the old days this genus was included in the Liliaceae, but now it gets a family of its own, the Smilacaceae. Some are reviled as obnoxious weeds, some are hugely ornamental. The ones I grow range in size from little S. pumila and S. bifolia to mighty S. smallii which covers the side of our house and part of the roof, tangled with noisette roses and Campsis 'Mme Galen'. The smilax is the boss of that group.


Most species have black fruits, but S. walteri has very ornamental red fruits. It’s a treat to visit the black water swamps of the southeastern states during the winter and find broad tangles of this species spangled with the bright red fruits – but at first you’ll probably be tricked by the more numerous red-fruited deciduous hollies.

Some of the southern species flower regularly here and set fruit, but the resulting seed do not survive the winters here.

I’ve always liked these plants and had a few in the garden. It’s hard to find anyone else with much of an interest in them. Professional horticulturists in general neglect them, although in the early twentieth century no less a luminary than Beatrix Farrand used them on some of the walls of Princeton University (or so I recall reading).

Most I grow in the open, but little S. pumila gets cold frame treatment. Its mottled leaves (in the style of some Asarum) make it worth the space. It will survive indefinitely in the open here in a sheltered spot, but the fruit will not ripen in the open air and bad winters can damage the plant severely.

I’m training S. laurifolia onto the deck: so far, it has climbed to the 10’ level. Mature plants in the wild are awesome, like something out of some lost world fantasy. The canes sometimes go thirty or more feet straight up into trees – I assume they have grown up with the trees. I grew my plants from seed collected more than fifteen years ago after a storm had brought down some smilax festooned trees – otherwise I never would have been able to reach the seed. This species has great ornamental value but is almost completely neglected. The foliage suggests that of Clematis armandii or Holboellia – it’s a rare garden visitor who has any idea what it is. There is nothing else like it in our indigenous flora.

The flowers of S. smallii are sweetly fragrant. Other species such as S. herbacea smell of carrion. When I was a kid I used to think of S. herbacea as “hardy philodendron” – it resembles that house plant (the heart-leaf climber) a lot.

Are they geophytes? Some grow from clusters of banana like tuberous growths.

Sarsaparilla was (still is?) made from some tropical species.

In the photo above is little Smilax bifolia, which is small enough to be used, potted, as table decoration.
Posted by McWort at 2:05 PM