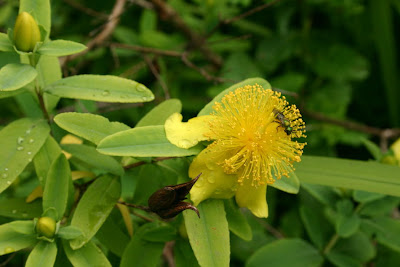 This post is out of chronological order: it should have been done a few weeks ago when the plant shown was actually in bloom. The plant in question is Hypericum frondosum. It’s native to the eastern United States with a distribution which ranges from Texas to New England – but apparently not in Maryland.


This is another one of those native plants which, in spite of all of its good qualities, is not often seen in gardens. I first saw it used well in many of the gardens on the quadrangle of the University of Virginia. A plant in full bloom is very handsome. It forms a low woody shrub, often with only one main stem up to several feet high – this gives it a sort of bonsai quality. The flowers are about two inches across and are produced so abundantly that it’s hard to find space between them.

The plant in the image above is a self sown seedling. It appeared in one of the bog trays years ago. Another one appeared in some nearby brickwork. It's not weedy at all, and these volunteers are always welcome.
Posted by McWort at 6:41 PM