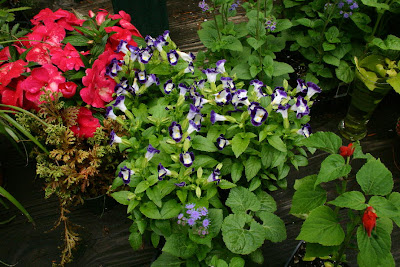 I’ve been growing Torenia fournieri off and on since I was a kid. In recent years the old seed grown typical form has been replaced by seed grown strains such as the ‘Clown’ series. In my experience these have a tendency to produce the occasional deformed flower, but they are bigger than the plants I remember from my childhood.

The first edition of the wonderful Bush-Brown America’s Garden Book had good things to say about Torenia fournieri, and that’s what got me started with it. I used to save home grown seed (produced by the zillion as it were) and sow it on the ground in the late spring. The resulting plants did not come into bloom until well into the summer, but they were care free from sowing until they were cut by frost.

Now I’m a bit ashamed to say I buy a few plants each year from growers of bedding plants. They are well worth having for their cool colors, interesting form and sturdy poise. And they have a curious trick they perform if you know how to get them to do it. The stigma has two flaps; touch the inside of the flaps gently and the flaps will slowly begin to close up over the “pollen” you have deposited there with your touch. This is the sort of thing a high-minded Victorian parent would have taught the children.
Posted by McWort at 7:17 PM