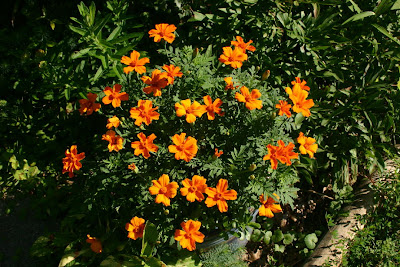 The sort of weather we’re having now, weather characterized by extreme heat, is the sort of weather which helps us to appreciate some of the plants grown as annuals. Hardy perennials are nice, although I think their value to the garden has been hugely exaggerated. Perennials in general are like determinate tomatoes: they do their thing and that’s all you get.

The plants grown as annuals have the advantage of blooming all summer and into the autumn until cut by frost. As long as they are watered, the better ones take care of themselves and continue to produce.

Tagetes marigolds (in contrast to Calendula marigolds) as every beginning gardener quickly learns, perform in our climate as well as anything. If I had a big garden I would have a big, long planting of nothing but these Mexican marigolds in all of their varieties.

As it is, I have room for one pot full of them. A few years ago I spotted some single-flowered marigolds which looked a bit bigger than the single-flowered forms I had grown in the past. This was my introduction to Tagetes ‘Disco Orange’, a current favorite. That's what you see in the image above.

Is it a sign of ageing? I’ve learned to like the pungent, bracing fragrance of Tagetes marigolds. When I was younger I used to think that these were the plants which should have gotten the name nasturtium (literally nose-scruncher). A little bit goes a long way, but I like that little bit.
Posted by McWort at 7:53 PM