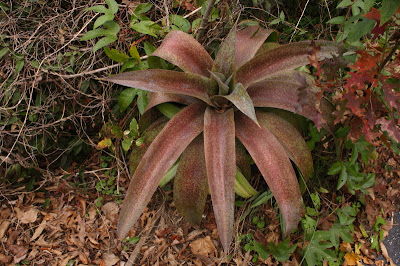 From a distance this one looks like one of those prickly desert plants you don't want to bump into. It looks a lot like its relatives in the genus Agave. In fact, the entire plant is pliable and rather rubber-like: even the little points at the tips of the leaves are soft. I've had this plant for three years. It spent the first winter in a cold frame. It spent last winter up against the house wall with a tarp over it at night and on severely cold days. Last winter was hardly a winter at all: some dahlias and potatoes survived even in exposed places.

The plant has grown so much that it will not easily fit into the cold frames. I frankly doubt that it will survive the winter in a pot above ground no matter how well protected. So I'm not sure what to do with it.

I had hoped that it would bloom this year. The inflorescence of this plant is a real production: imagine a purple asparagus about the size of a broom stick. Maybe we'll get to see that next year.

About the name:  ×Mangave is a nothogenus set up to name hybrids between plants nominally assigned to the genera Manfreda and Agave. Manfreda, Agave and Polianthes are so closely related that some species form hybrids readily. I'm of the point of view that if plants are capable of crossing and forming viable progeny, then it makes no sense at all to place them in separate genera - in fact, if the progeny are not only viable but are capable of producing viable offspring themselves, then that suggests that appearances notwithstanding the plants in question are all of one species. To me it makes better sense to consider most so-called intergeneric hybrids not hybrids at all but simply evidence of one morphologically variable species.  So I'm using the name × Mangave only reluctantly.
Posted by McWort at 1:56 PM