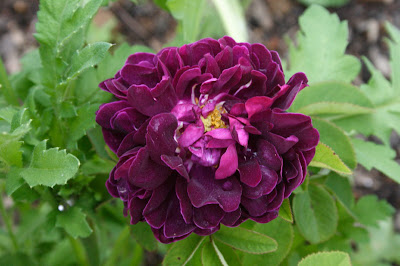 This is Rosa 'Tuscany Superb' or as it is sometimes called 'Superb Tuscany'. 'Tuscany' itself is an even older rose, and to paraphrase the way one commentator put it, 'Tuscany Superb' is everything 'Tuscany' is but better. Graham Thomas does not give a date of introduction for 'Tuscany Superb', but it had been noticed by the middle of  nineteenth century. Rix and Phillips say "raised by Thomas Rivers in England shortly before 1837." Its fragrance is as deep and intense as its color. By the time this rose was recognized, the floral style which it represents was already falling out of style. But it is an amazing example of that style: in particular, notice how the individual petals are so distinct and seemingly so substantial:  it's easy to see why 'Tuscany' itself was called the velvet rose.

No, it's not blooming now. The photo was taken back in mid-May; it certainly deserves a post of its own - I'm not sure how I overlooked this one at the time.
Posted by McWort at 8:35 PM