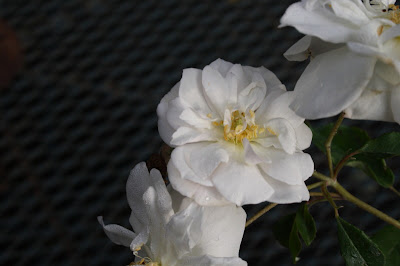 Another box of roses arrived yesterday. The one you see above came out of the box in bloom, and a fresh flower was open this morning. This is a rose which has almost certainly grown in Maryland for at least a century, and  might just date to pre-Civil War times.

Mrs. Keays' Old Roses, published in 1935, has been a frequent companion in recent years. For me, the most intriguing  aspect of her book is her frequent discussions of what we now call “found” roses: those nameless roses which survive in old cemeteries or on old home sites, or have been passed along from person to person for who knows how long.  Notice the double quotes around the name "St Leonard". Standard practice is to use single quotes for accepted cultivar names. But this name, “St Leonard”, is not the original name of this rose. The original name has been lost, thus the double quotes for “St Leonard”. Roses in commerce come and go, and these comings and goings have little to do with the quality of the rose. When a rose survives among gardeners for decades, even centuries, that’s almost certainly a clear indication that that rose has something special to offer. And that something special more often than not is fragrance.

The rose called “St Leonard” is a good example of this. It’s nothing like modern garden roses: the flowers are small, seemingly shapeless and white with a touch of pink. The plant itself is a gaunt bush with the potential to occupy more space than most small modern gardens have to offer. But it does re-bloom throughout the season, and it carries one of the great rose fragrances.

It has so far successfully kept its identity a secret: this same rose has evidently been found here and there around the country, and that suggests that it is not a spontaneous seedling but rather a once recognized cultivar deliberately spread by gardeners. See the note by Fred Boutin at the bottom of the page here:
http://www.helpmefind.com/rose/l.php?l=2.24832

The name used above, “St Leonard”, refers to the community in Calvert County, Maryland where Mrs. Keays first saw it about eighty years ago.  Its name was already lost back then, and who knows how long this rose had grown in that community. Where does it fall in the big rose picture? It’s what we would expect an early nineteenth century noisette to look like, and the assumption is that it is a forgotten noisette. The noisettes are hard to define because no sooner did they arise than they were hybridized out of recognition. Imagine what you would get by crossing the musk rose (or, since few people have any idea of what the old musk rose was like, substitute multiflora rose, which is very similar)  with a china or tea rose, and you’ll have an idea of what the early noisettes were.  From the beginning they were a variable lot.

Mrs. Keays' notes are valuable for another reason: roses which have persisted in gardens for decades are obviously well adapted to the conditions in those gardens. With noisettes, there is always the question of winter hardiness. Because the rose “St Leonard” seems to have survived for a long time at St Leonard, that raises hope that it will be a good garden plant here. Lusby and St Leonard are about 75 miles southeast of here, and St Leonard is close to the water.  I note that the elevation at St Leonard and Lusby is given as 105’; the elevation here is 285’ (both from Wikipedia). That difference in elevation might make a significant difference in its performance here. We’ll see.
Posted by McWort at 10:29 AM

What a timely post, my dear! I have just returned from a rose conference at the Sacramento City
Cemetery, where I saw a lovely "St. Leonard", and other fabulous found roses ... and I met and chatted with Fred Boutin himself! You already know that I am quite a fan of these nameless foundlings, and it is good to see you singing their praises (and so eloquently describing their circumstances.)

Four additional found roses are on their way to me as we speak ... I packed and shipped them to myself before I left California on Tuesday. The one I am most excited about is a Boutin-found rose that he feels may be the true 'Bloomfield Abundance'. A stem of this rose went to Florida Southern College with Malcolm Manners for DNA testing, and we may have our answer in fairly short order.

These found Noisettes are almost always fabulous ... as are the Chinas ... and Hybrid Chinas ... all of them really. :)

Sounds like a great trip, Connie.
Keep us posted on the results of the ‘Bloomfield Abundance’ story. I have not grown this rose yet, but I’ve long been aware of G.S. Thomas’ discussion of the similarity of this rose and ‘Cécile Brunner’.