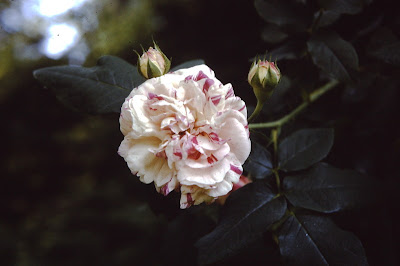 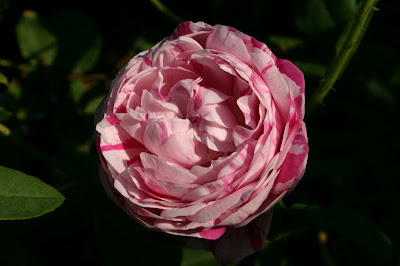 I first saw this rose in the garden of Philadelphia rose enthusiast Richard Thomson in 1967, and it's been a favorite ever since. The plant forms a big, upright shrub from the branches of which the full, globular flowers  loll gracefully. Roses striped in this way are among the oldest garden roses, and of all the ones I have seen, 'Variegata di Bologna' seems to have the sharpest, clearest variegation. Yes, it's sweetly fragrant, too. Most of the flowers come early in the rose season, although a few appear later in the year.

Of the two photos here, the upper is a legacy image scanned from a Kodachrome slide taken during that 1967 visit. The other is from 2010, taken in the home garden.