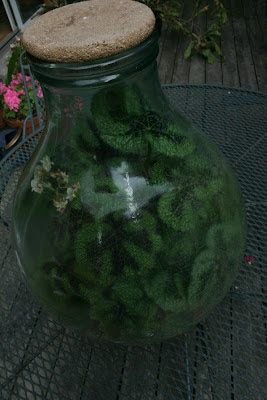 Begonia masoniana caught my eye today: it’s blooming again. It’s been decades since it last bloomed, yet as I recall it was at about this time of year that time, too. The flowers briefly produce a sweet scent late in the day but at other times seem scentless.

Houseplants here generally have one thing in common: they quickly die. Perhaps that should read “they are quickly put to death”. There have been a few exceptions, most of them being desert plants which survive dry atmospheres and dry soil. There are some Stapelia, Huernia and Gymnocalycium which have been here so long I’ve forgotten their sources.

But as a rule, “soft” houseplants don’t have a chance here. In this case, the exceptions to the rule are improbable: some Selaginella and the Begonia masoniana. These, too, have been here so long I forget their sources. They are neglected as shamelessly as the succulents, yet for decades they have thriven. They get watered perhaps three times a year. How can that be?

They are still here because they grow in big ornamental glass jars. Both jars are about sixteen inches in diameter, one with the begonia is pear-shaped, about twenty-two inches high, the one with the Selaginella is about sixteen inches high and squat. These jars have openings five inches in diameter which make it easy to get a plant in but not so easy to get a freely-growing one out. But talk about care-free: other than pouring in about a cup of water two or three times a year, that’s it! And this has been going on for decades.
Posted by McWort at 8:36 AM