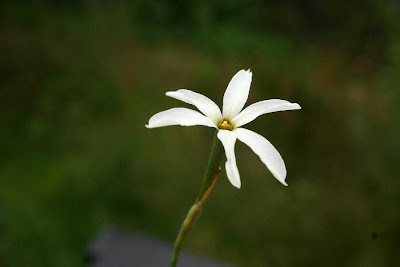 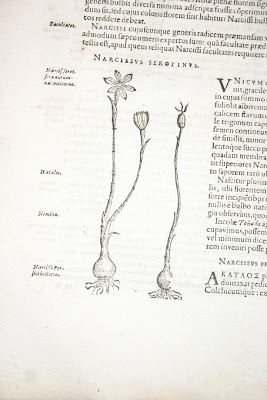 I'll bet that most of you wouldn't know what the plant shown above is without my telling you. And then when I told you, you might think I'm a bit off and refuse to believe me. But it is a daffodil, at least in the current, usual arrangement of things. It's Narcissus serotinus, a plant which has been known to European plant enthusiasts since at least the end of the sixteenth century. It's in the old herbals, but few transalpine gardeners back in those days had probably seen it as a living plant. And there is a hint in those herbals which lends credence to that point of view. The illustration used in the old herbals was drawn from a dried plant. How do we know? First of all, notice that I wrote "illustration" rather than "illustrations". The illustration prepared by the Antwerp publisher Plantin for the works of Clusius shows an error, and that error (in the form of copies of this illustration in various degrees of fidelity to the original) was perpetuated for well into the eighteenth century. The error is this: if you look at that illustration, it seems as if the stem of the flower is jointed, somewhat like a bamboo stem. No daffodil has such a jointed scape. But it's now known that if the fresh, blooming scape is dried, it sometimes does develop wrinkles which in an illustration do look like joints. But so few people had actually seen the plant back in those days that the error persisted for centuries. See the account in Bowles' A Handbook of Narcissus (from which I've taken most of the information in this paragraph) for more details.
And why had so few people seen it? At first glance, it does seem strange: this species has an extremely wide range, from Portugal to Israel on both sides of the Mediterranean and on many Mediterranean islands. But it's a tiny plant; as daffodils go, it's hardly a prepossessing one. For another thing, it blooms in the autumn. But the third reason is the clincher: it does not grow as a garden plant in northern Europe. It requires very careful protection to be grown at all in cold, dull climates.
The first image above shows the blossom; the image below it shows the illustration used in the Historia of Clusius (the 1604 edition). According to Bowles, Clusius had first used this same illustration in 1576.
Posted by McWort at 2:51 PM

Since making this post I’ve been in touch with Harold Koopowitz. Koopowitz is the co-author, with Ben Zonneveld, of the taxon Narcissus miniatus. After examining the image above, he suggested that it is likely N. miniatus rather than N. serotinus.

The Kew List currently cites Narcissus miniatus as a synonym of N. obsoletus.