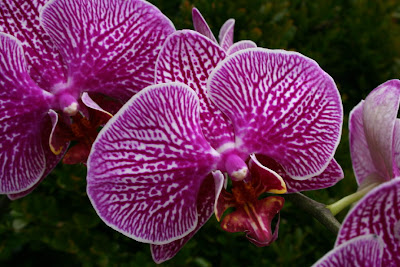 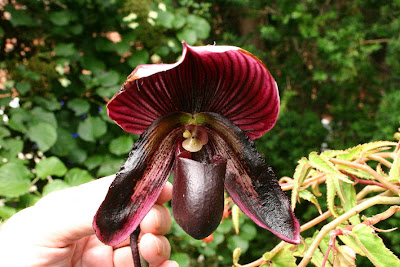 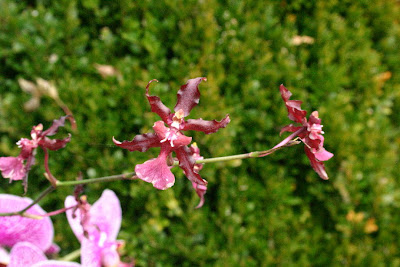 While walking Biscuit the other day, I ran into one of my dog-walking gardening friends. I think of her as a friend because although I know little about her, I do know her name. With most of the dog-walkers I encounter, it’s the dog’s name I know and remember.

Susan reminded me that again this year a bus will travel from Brookside Gardens to the Philadelphia Flower Show. I’ve never been to the Philadelphia Flower Show, and this might be the year I do it. A half-century ago there was a respectable winter flower show in Washington, D.C. I remember three things in particular from those days. One is that it was the first time I ever smelled acacia (probably Acacia farnesiana). Another is that after the show was over, many of the exhibitors sold off their plants at reasonable prices. One year I came home with several potted palms which looked big at the show and looked gigantic when I got them into my bedroom. The third memory concerns what was called Dancing Waters. This was a display of fountains whose various gushes, spurts and sprays were coordinated with changing light effects and music being played in the background. I remember in particular being transfixed as the music played “Somewhere a voice is calling..." and the water and light worked their magic.

We gardeners frequently suffer from a particular sub-species of cabin fever: it’s the middle of winter, and we want lush, verdant, fragrant vegetation. We’ll do sometimes unreasonable things to get it. For some people a good flower show is the cure. In my case, this need has recently caused me to break a long standing self-imposed rule: stay away from orchids. I’m intrigued by them, beguiled by them – and I have no place to grow them. When I was a kid, one of the neighbors had some orchids growing (really dying) on a slab of wood hung over the kitchen sink. On the rare occasions when I saw these, I was filled with wonder: how could they survive without dirt? She also had “air plants” – various small nondescript bromeliads (probably Tillandsia plucked from the telephone lines in southern Florida) which reminded me of hard prickly clumps of tiny grasses. The popular horticultural press was full of advertisements which promised that you, too, can grow orchids, and plenty of people were trying. This was about the time that fluorescent lighting became readily available, and in that neighborhood there were plenty of orchids, bromeliads and gesneriads thriving under that miraculous lighting.

The last few weeks have seen the food stores and the big box stores full of inexpensive and gorgeous orchids. I think I’m right to say that $10 a pop is inexpensive. The temptation was too strong: the stunning Phalaenopsis seen above came home with me recently, and so did another charmer, an Oncidium noted for its intense chocolate-vanilla fragrance. Did I mention that I sneaked in a Paphiopedilum earlier last year? Obviously I’ve already got both feet firmly implanted in the quicksand: there is probably no turning back!

Three of the symptoms of my condition are shown above: top to bottom, an unnamed Phalaenopsis, and unnamed Paphiopedilum and and unnamed Oncidium. The Oncidium is the fragrant one, and is almost certainly of the well-known Sharri Baby grex.
Posted by McWort at 4:44 PM