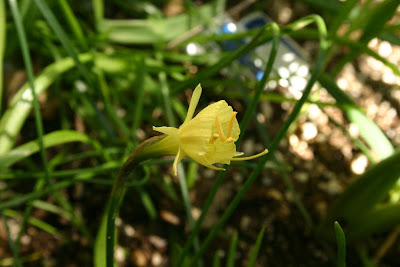 Many gardeners know about fall and “spring” (really winter) blooming crocuses. Crocus collectors know that it’s possible (with the help of cold frames) to have crocuses of one sort or another blooming from sometime in September right through the end of the crocus season in March.

But hardly anyone, at least anyone in our climate, seems to realize that the daffodil season can be just as long – in fact, a bit longer. To be sure, this won’t happen in the open garden in most years. But with the help of a cold frame (and remember: cold frame means unheated frame), it’s possible to have daffodils blooming from September until the garden daffodils take over.
In the protected cold frame here the fourth daffodil of the season (the season which started in September) is now blooming: it came under the name Narcissus bulbocodium pallidus. That’s it in the image above. The season opened with Narcissus serotinus/miniatus in September, continued with Narcissus cantabricus foliosus, then flowered an unnamed Narcissus tazetta variant (still in full bloom) and now the little hoop petticoat has joined the party.

All of these are small-flowered plants with a wild, unimproved look about them. You probably wouldn’t look twice at them in mid-April during the peak of the daffodil season. But in the middle of January they have just what it takes to keep the flame flickering until the warmth and light return.
Posted by McWort at 3:30 PM