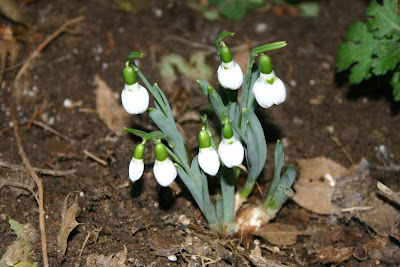 On December 18, after hearing the weather report, I dug the clump of snowdrops shown above and replanted them into one of the cold frames. They have been blooming there since. The snowdrop shown is my “Christmas snowdrop”, a plant selected from a mass planting of Galanthus elwesii in the front lawn.

I didn’t photograph this one until about 4:45 P.M. today – the sky was by then overcast and the sun was setting. So I used a flash; the flash used at close range rarely produces good results, but the image above will at least give you an idea of what this snowdrop is like.

Winter sweet and witch hazels were blooming before the big snowfall, but the snow was so deep that it kept me out of that part of the garden. Tomorrow I’ll check the back garden for signs of bloom on these winter-blooming shrubs.
Posted by McWort at 8:28 PM