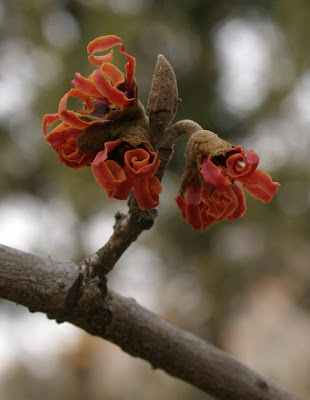 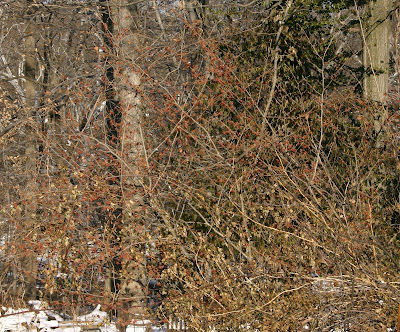 An unexpectedly heavy snowfall yesterday has buried the garden. I was careful to cover the cold frames the day before. The low tonight is predicted to be about 12º F; early this morning it was about 10 º F. The snowfall however is a blessing: scattered here and there around the garden there are snowdrops more or less in bloom. The snow will protect them from the worst of the extreme cold.

I’m inclined to say that the best herbaceous plants for winter effect in our climate are Helleborus foetidus and Arum italicum. The former gives the correct impression that something is actually happening. The latter is so improbably lush whenever the temperature is above freezing that it brings on the very incorrect impression that the garden is not just sprouting but actively burgeoning.

Among woody plants, big plants of wintersweet are not to be scoffed at, but how rarely we see them in local gardens. Most gardeners are not aware that in our climate this is eventually a tree, not a shrub. Years ago I came across an old, neglected planting of Chimonanthus praecox which had been allowed to grow into the natural tree form of the plant: they were so large that I did not recognize them at first. The name wintersweet is very apt: the scent of this plant is very free on the air, much more so than that of the witch hazels. Lucky the gardener whose wintersweet has reached a size which allows free cutting of the branches in the winter.

But among woody plants the best for winter visual effect are the witch hazels. They are hardier than the wintersweet and offer a wider color choice which ranges among various yellows and oranges into rusty, ruby- and garnet-reds. Our appreciation of the flowers is much enhanced when the plants have a suitable background, for instance the foliage of some broad leaf evergreen. Ideally this background should be placed so that the witch hazel can be viewed with the sun to one’s back.

The one in the photos above is the cultivar ‘Feuerzauber’ (say foi-er-tsau-bear) which originated in the early twentieth century in Weener, Lower Saxony, Germany according to the account in Bean (Eighth Edition, fully revised). In modern German the witchhazels are sometimes called Die Zaubernüsse (from the words for magic and nut).

The big view image was made today: later, as the temperature rises, the petals will unfurl more and the overall effect will be better. But I’m not complaining! The close up is from 2006.
Posted by McWort at 3:00 PM