Yet another early daffodil 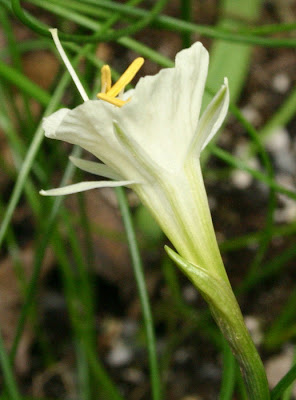 Back in mid-December the first of the hoop-petticoat daffodils began to bloom (and were quickly mutilated by snails). Those flowers came from a plant received as Narcissus albidus foliosus. This week, a look-alike daffodil with a confusingly similar name began to bloom. This one was received as Narcissus cantabricus foliosus. That’s it in the image above.
Whatever they are, they are little charmers. In the several years they have been here they have been erratic about time of bloom. This season I gave the bulb frame a good soak in late September; the little daffodils responded by quickly putting up foliage. Now, one by one, they are coming into bloom. The next to open will probably be one received under the name Narcissus albidus kesticus. These plants received as Narcissus albidus variants are probably better thought of as forms of N. cantabricus. But daffodil nomenclature has roiled in recent years, so all of these names are suspect in my opinion.