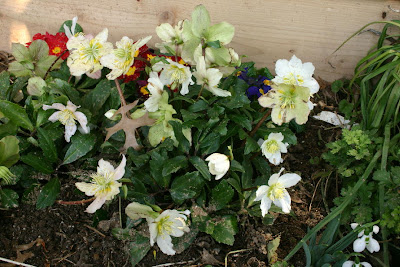 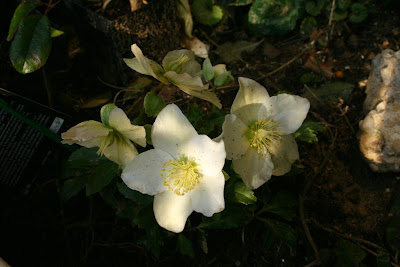 Several of my gardening friends and I have for years shared the pursuit of a sort of holy grail: a Christmas rose which really does bloom at Christmas. One garden we know about has such a plant, but its provenance is not known, and its performance from year to year seems a bit erratic. Hellebores of the Helleborus × hybridus sort are now truly common in local gardens, but few people seem to grow Helleborus niger. In fact, this species has a reputation for being difficult to grow, especially when compared to the easy growth of the members of the Helleborus × hybridus group.

Nurseries used to buy in bareroot Helleborus niger and then pot them up in a peat-based medium. That was a big mistake, and it got the plants off to a bad start. Not knowing any better, most buyers probably attempted to duplicate similar conditions in the garden. Such plants were probably doomed. Every once and a while a plant would take hold, and observant growers often noticed that such plants were near concrete. Eventually the word got around that it was neutral or alkaline soil which Helleborus niger needs.
Years ago I discovered that this species really goes to town in ComPRO (a composted sewage sludge product which contains loads of lime). I once dug a plant and tried to trace the root system: it went on for several feet before I gave up.
Yet even those of us who grow Helleborus niger successfully were still facing one major disappointment: our plants did not bloom until sometime in March.
German nurseries in the early twentieth century grew clones or seed grown strains of Helleborus niger selected for early bloom. But eventually, the emphasis among growers seems to have shifted from selection for bloom time to selection for large flowers. The plant I have had in my garden for decades produces very large flowers, flowers sometimes five inches in diameter – in early March!
The images above show two recent German tissue propagated clones selected for early bloom time. Each of these is said to begin blooming in November! The two cultivars shown are (above) ‘HGC Jacob’ aka ‘HGC Jacob Classic’ and (below) ‘HGC Josef Lemper’. I intend to grow these in a cold frame to give the early flowers every chance of developing well. And, plants growing in the protection of a cold frame are more likely to ripen viable seed.
I'm very excited to have acquired these plants. So excited that after taking the pictures and noticing that the blooms are mud-splashed, I've gone ahead with this entry. I'll try to get better images of cleaner blooms soon.
Posted by McWort at 5:27 PM