The four plants shown here are related to the familiar tradescantias. 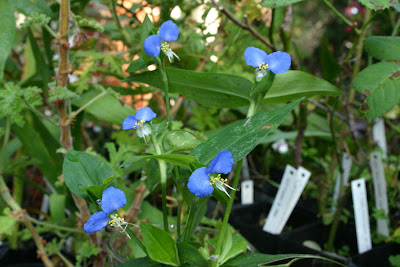 Above is Commelina communis, the Asiatic day flower, which is widespread in ruderal situations throughout eastern North America. Its flowers are open early in the day and soon (within a few hours on hot days) shrivel. Their blue color is as beautiful as that of any blue flower, and in this case “any” includes any gentian I've seen, the Chilean blue crocus and Heavenly Blue morning glory. 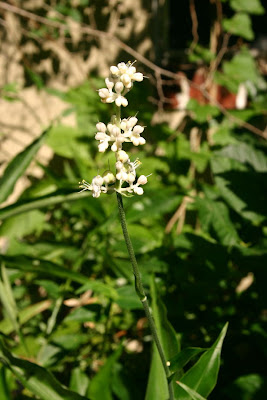 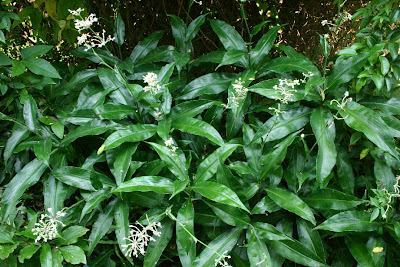 Pollia japonica, above,  looks like nothing else in the garden. Without knowing what it is, you would probably have a hard time placing it. In some ways it looks like a cross between a knotweed and a bamboo. By this time of year the plants have reached four or five feet in height and are blooming. The plants have wonderful poise. The individual flowers are not impressive, but the inflorescence is nevertheless interesting and catches the light beautifully. The foliage is unusually clean and handsome; the plant has no serious pests - or the pests have not yet developed a taste for it. It moves around freely in this garden by both stolons and seeds, and that makes me wonder if in the future it might become a pest. In a sense it bears the mark of the pest: it has small round blue fruits like those of the mile-a-minute vine or those of Ampelopsis brevipedunculata. 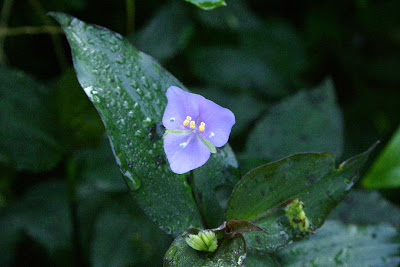 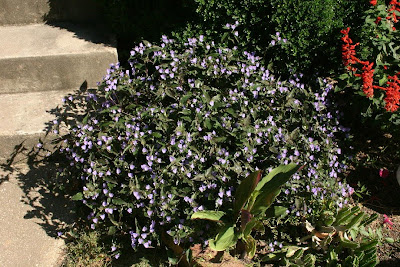 Tinantia pringlei, above, has been in this garden for only a few years, but it is making a very good impression. Is it an annual or a perennial under our conditions? It seems to be a perennial, although self-sown seedlings appear here and there. Each plant forms a mound about eighteen inches in diameter, and the lavender blue flowers are borne freely enough to make a good effect. At least one related species is known to be invasive and difficult to control, but so far this one seems well behaved. Bob Faden introduced this Mexican plant to our group. 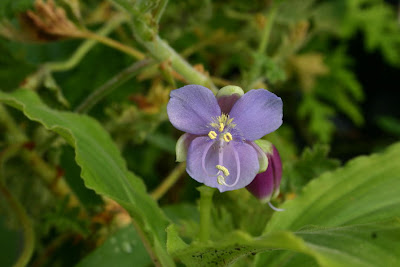 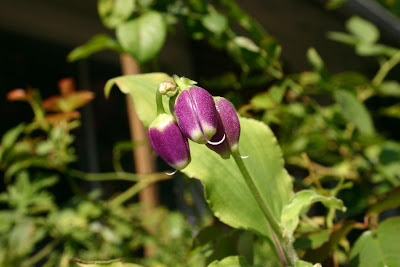 Tinantia leiocalyx, above,  is new this year for me. It’s very attractive in bud – when the flower actually opens the effect is hardly better. To me, the bud in the middle in the lower of the two images immediately above looks like a reddish-purple coffee bean. This is another Mexican species,  and Bob Faden, who introduced it to our circle, says it is an annual under our conditions. The one shown here is in a pot: will it get bigger in the ground? This one is worth growing for its foliage, too.
Posted by McWort at 11:30 AM