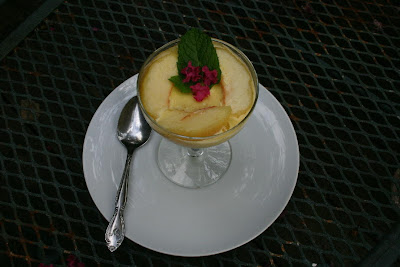 While visiting in western Virginia last weekend, Wayne, his mom and I had lunch at a local pizza place. The food, both in quality and in variety, was just what you would expect in such a place – and it was just what I was in the mood for. After sharing a pizza and an eggplant Parmesan sub, I took a look at the desert menu. Tiramisu was listed, but the rest of the party did not seem interested. And then I spotted something on the menu which really surprised me: zabaglione. I have a thing for zabaglione, and immediately I began to imagine the possibility of zabaglione dripping languidly over a ripe white peach. But the pizza place version came with strawberries, and at that the tiramisu began to sound better. So we split the tiramisu: one part for Wayne’s mom, one part for Wayne and ten parts for Jim.


Later that day we visited a local grocery store and guess what was there: local Virginia peaches. There was one bin of yellow peaches and one bin of white peaches. I bought a couple of pounds of each. I couldn’t wait to get home and whip up a pot of zabaglione.

There are no doubt plenty of sensible people who would say that a perfectly ripe peach needs no further adornment: it can be made different but it cannot be made better. These peaches turned out to be very good indeed: so juicy that as I peeled them I made a real mess with the freely flowing juices.

In the photo above you see the zabaglione with one of the white peaches. I suppose if I were a professional photographer doing a food magazine cover I would have at best halved the peach and shown just a bit of the zabaglione slinking down the side of the peach. But from the standpoint of the person about to eat this, what I did was better. The sliced peaches were carefully arrayed around the edge of the bowl leaving a deep well in the center which was filled with the zabaglione. A sprig of mint provided a nice flavor contrast. Yummy…

And what is zabaglione? It’s a very simple custard sauce made with nothing more than egg yolks, sugar and a bit of spirits for flavoring. Marsala is traditional and that’s what I used on the first trial; on the second, I added some orange zest and a bit of vanilla. Both were great. Mix the ingredients until the eggs begin to thicken a bit and get pale, then very carefully warm the mixture over the steam from a double boiler whipping it the whole time. Watch it carefully; in a few minutes it will begin to thicken even more. Once it reaches the desired thickness, it’s ready to go.

Custard sauces are one of those old-fashioned things which seem to have disappeared from contemporary American cooking. It’s hard to see why since they are easily prepared, use familiar ingredients and are all but universally appreciated. The word “custard” might be the problem: custards are notorious for curdling, collapsing and so on. These things happen to people who talk on the phone or watch the television while cooking. These are the people who regard the preparation of Hollandaise sauce as requiring unattainably advanced culinary techniques. These are the people who shop in the “prepared food” aisles of the grocery stores.

Whew! Writing all of that was a lot of work; I need a simple reward to cheer me up – something with fresh ripe peaches and a nice custard sauce…
Posted by McWort at 12:03 PM