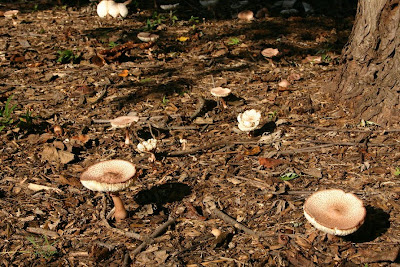 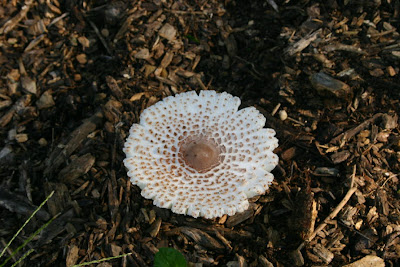 Plenty of rain during the middle of August has brought up plenty of mushrooms. There is a place which Biscuit and I pass during our walks which was slathered with wood chips last summer. I've kept an eye on it since then waiting to see what might sprout up.

In the pictures above you see Leucoagaricus americanus in profusion. This species is edible, but the quality varies. I took one home and sauteed it in butter; it releases a savory woodsy-mushroomy aroma while cooking. But one bite was all it took for me to spit it out. It had the same disagreeable taste that I have sometimes noticed in the stems of shiitake mushrooms from the grocery store.
Posted by McWort at 9:49 PM