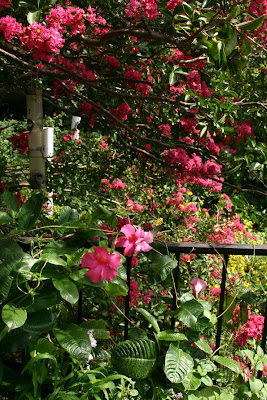 Earlier this year one of the local big box stores put out some handsome 6' tall Dipladenia. The price was too steep for me ($50), but the handsome plants caught my eye every time I visited that store. As time passed it became obvious that people were not buying them. Weeks passed, and the plants began to twine into the chain fence against which they leaned. Eventually they were put on sale for $20 each, and they began to find new homes quickly. I bought one pink and one red. It took me the better part of an hour to untangle the stems from the chain link fence, but that bit of bother paid off handsomely in preserving the developing flower buds.

In the image above you don't see many flowers on the Dipladenia. That is because another member of the household has taken to picking bunches of flowers dialy. And when the flower is picked with a stem, it takes not only the blooming flower but all of the buds developing on that stem.

When I bought these plants a little voice told me that I probably would regret it. The problem is that I have no idea what to do with them during the winter. They are already really too big to bring into the house. Will cuttings root? It will be heartbreaking to leave them out to freeze.

One of my duties when I worked for a large estate garden in the city (Washington) was to grow Dipladenia/Mandevillia on a terrace balustrade. I learned that they (go figure!) develop thick tuberous roots and can be overwintered in a semi-dormant state. Having said that, because they grow so quickly and are prone to mealy bug, there might be something to be said for starting over with cuttings!surni

Thanks, Chris. Do you think I can cut them back to the top of the pot for winter storage? These plants are performing so well that I can easily see them becoming must haves for the summer garden.

You mentioned mealy bug: I've got mealy bug on lots of plants outside this year. This is the first time I've seen lots of this pest outside.

I have mealy bug on my Yew ( Taxus) too this year. Maybe because it is so dry? I also am losing buds left and right due to a new addition to the family ( puppy).