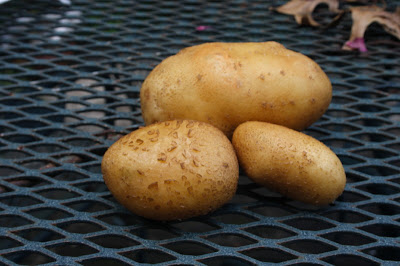 Although there are those who insist that no such thing exists, I had a free lunch the other day.

There was a small compost bin in my community garden plot last year. At the end of the growing season last year I gathered up debris from my garden and stuffed the bin. I had invited my neighbors in an adjacent plot to do the same. Later I tilled it all into the soil.

Evidently the “all” included some pieces of potato, because a potato plant appeared in one of the tree peony beds early this year. I dug the potato plant up last week,  and you see the harvest in the image above.  Three potatoes make a comically small harvest, but they went on to make a fine lunch!
Posted by McWort at 11:20 AM