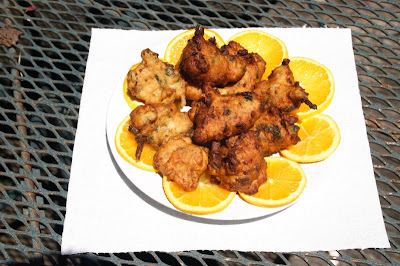 While visiting mom at the rehab center last night I watched part of a television program which featured several local restaurants notable for their breakfast fare. At one restaurant a happy diner was being handed a clutch of freshly made beignets. That did it for me: I would make beignets for breakfast the next day.

It's been years since I last made them, so I went online to check some beignet recipes. I googled "beignet" and got page after page relating to something called the "New Orleans Beignet". This "New Orleans Beignet" is nothing more than a square donut made with sweetened bread dough, fried and then dusted with powdered sugar. To me, that's a donut, not a beignet.

The beignet I'm familiar with is made with  pâte à choux, not with a yeast dough. It only takes about ten minutes to whip up a batch of pâte à choux, and if the hot oil for cooking is ready, an additional few minutes to cook up a batch. I flavored the batter with aniseed and orange zest, a combination of flavors I've grown to like very much. The batter was not sweetened. The six beignets which emerged were given a dusting of powdered sugar and then disappeared quickly. The rest of the batter went into the refrigerator for another use.

What that other use was became apparent at lunch time. I had some canned salmon left over from the day before, so I mixed it into the unsweetened beignet batter. Some chopped onion, parsley and celery leaf  were added. In no time at all I had a plate of savory beignets on the lunch table. Those are what you see in the image above.
Posted by McWort at 1:59 PM

Email ThisBlogThis!Share to TwitterShare to FacebookShare to Pinterest
Labels: beignets