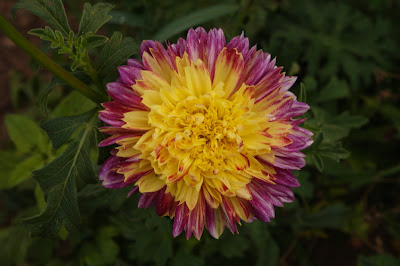 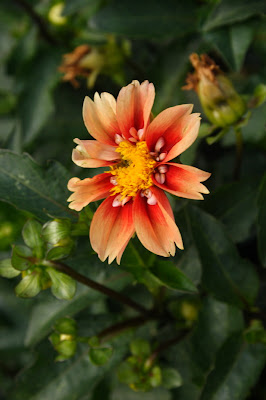 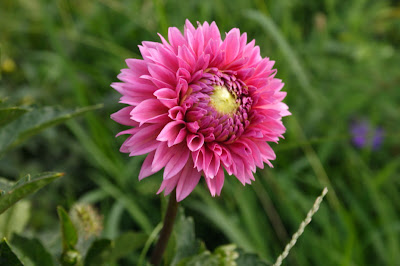 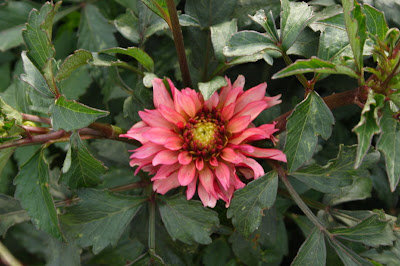 Although I've grown a few dahlias off and on over the years, I've never become a dahlia enthusiast. A big part of the reason is that our climate really isn't right for them. On the one hand, they are extremely frost tender; on the other hand they do not thrive under hot, humid conditions. Once you've seen them in cool summer areas where the plants are lush, the flowers are not malformed and the colors glow, it's hard to be satisfied by the results we get here. It's no accident that the local dahlia shows are not at mid-summer but rather precariously close to the time of the first night frosts.

Generally speaking, the farther the form of a dahlia flower departs from the ancestral form, the more likely it is to have problems in our climate. When I look at the catalogs, I'm drawn to the anemone-flowered sorts. The ones I've tried produce mostly malformed flowers. 'Boogie Woogie', shown above at the top of the series of images, is an anemone-flowered sort.

The next one is 'Esther', a collarette sort. So far this year, most of the flowers this one has produced have been missing one petal.

Next is 'Sandra': I have no complaints here.

The last one is 'Gallery Art Deco': so far, the flowers of this one have been hidden down in the foliage.

I planted twelve sorts this year, so look for eight more in the weeks ahead.
Posted by McWort at 10:51 PM