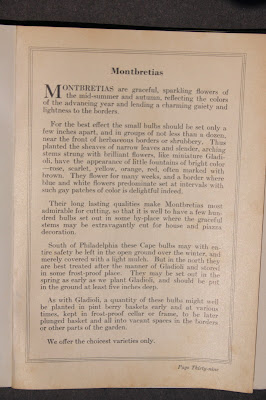 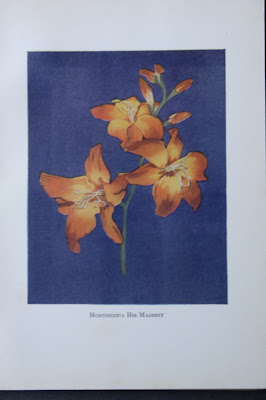 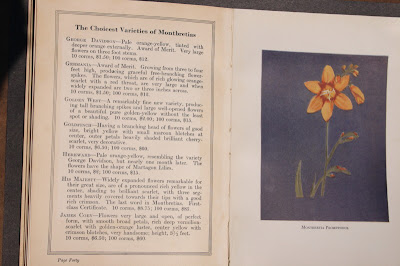 Here’s a combination for lovers of scintillating color: montbretias,  marigolds and strawflowers.


The name montbretia was in use throughout the late nineteenth and much of the twentieth century for those Crocosmia hybrids which had down- or outfacing-flowers. The earliest hybrid in this group had funnel-shaped, drooping blooms; later hybrids had larger, flatter blooms variously arrayed on the scapes. Interest in these large-flowered hybrids reached a peak before the First World War, and in those days the great cultivars were ‘His Majesty’, ‘Prometheus’, ‘Star of the East’ and others.
Here are some good links to the early history of these hybrids:
http://www.norwichinbloom.co.uk/CrocosmiaLocalRoots.html
http://www.theafricangarden.com/iridaceae_iris_family_image_index.html
Evidently few of these plants ever became established in eastern North American gardens; and as they disappeared one by one from the lists, they disappeared from our gardens.  For a long time only such varieties as ‘Lady Wilson’, 'James Coey' and ‘George Davison’ (often misspelled ‘George Davidson’) were readily available.
A copy of the John Scheepers catalog from spring of 1928 kept their memory alive for me.  There, several pages were devoted to a nice listing of the then best hybrids. A gracefully written introduction introduces the reader to these lovely plants, and goes on to suggest that they are suitable for decorating the “piazza”.
What in the world, in that context, is a piazza? The uses of the word familiar to me, such as Piazza San Marco, suggested a scale not usually associated with domestic architecture. As it turns out, in some parts of the country the word has come to mean veranda or porch.

Now dozens of the old montbretia varieties are available from English sources, and some are appearing on lists here in the US. Some of my plants came from Far Reaches Farm.
In one of the images above you see montbretias combined with marigolds and strawflowers.  The strawflowers are from the 'Bright Bikinis' strain.  The fresh flowers, when refrigerated, close up; when they warm up, they open again. The marigolds are various “French” marigolds of seed strains such as ‘Disco Orange’, ‘Durango Mix’, ‘Janie Spry’, ‘Hero Orange’ and ‘Little Hero Flame’.


The montbretias shown are, left to right, ‘Lady Hamilton, 'His Majesty' and  ‘Castle Ward Late’.  These date from the late nineteenth century (‘Castle Ward Late’, said to have been raised by Max Leichtlin before 1895 according to the catalog of my source, Far Reaches Farm) and from the early twentieth century ( Lady Hamilton, raised by Davison in the period 1895-1912 and  'His Majesty', raised by Jack Fitt at Earlham Hall in the period 1916-1924).  See the Norwich In Bloom site cited above for more information.
Several pages from the John Scheepers catalog for Spring 1928 are included. If you own the copyright to these and object to their usage here, please notify me and I will remove them.
Posted by McWort at 12:17 PM

Wonderful. Karen just brought home a new (to us) crocosmia. I love 'em.