Glitter and be gay... 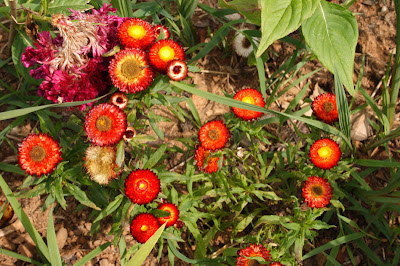 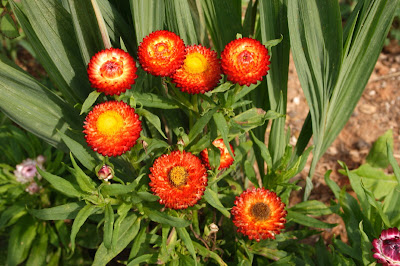 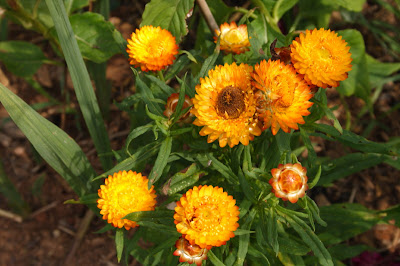 There is a short border in my community garden plots given over to plants with intense orange flowers: montbretias, marigolds and strawflowers. Here are some of the strawflowers. These are the old garden plant Helichrysum bracteatum, a plant originally from Australia. They take well to our climate and are easily grown.

The first time I grew these plants decades ago I was surprised to find that the fresh flowers are just as crispy as the dried ones. In the old days they were sometimes compared to artificial flowers made from snips of colored tin. When I run my fingers over the tips of the colorful bracts, it reminds me of the feel of Velcro.

"Glitter and be gay" came to mind when I was examining these plants recently. It's the title of a song (a sort of endurance feat for coloratura soprano)  from Leonard Bernstein's Candide. Long ago I was lucky enough to hear Barbara Cook sing this in a live performance -  she was the first to sing it when Candide was premiered back in 1956. She went on to become the fountain of youth of the lyric stage: a half century later her occasional performances are still well received.

The  wikipedia entry on Barbara Cook includes this quote from one Walter Kerr "Barbara Cook, right off a blue and white Dutch plate, is delicious all the time..."  I got a chuckle from that because somewhere around the house we have a little pamphlet published long ago by a once famous brand of Pennsylvania Dutch style noodles. After several pages of recipes, there is a picture of a very young Barbara Cook and a quote endorsing the product.
Posted by McWort at 9:38 AM