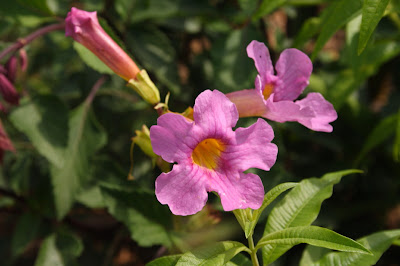 This is Incarvillea delavayi, sometimes called the hardy gloxinia. It's not closely related to the florists gloxinia, Sinningia speciosa, and what it is related to will probably come as a surprise to most gardeners. It's a member of the botanical family Bignoniaceae, which makes it a relative of two native vines,  trumpet creeper and cross vine.

Although an old plant in commerce, and a very ornamental one in bloom, it's not common in our gardens. Its hardiness was long suspected, but in fact it is very cold tolerant. It is, however, intolerant of summer wet,  and that circumstance set the stage for a misunderstanding of its hardiness. What the gardener observes is that the plant dies down in late summer and as often as not does not reappear the following year.  The conclusion is that it died during the winter. In fact, it probably died during one of our wet, hot summers.  Kept dry from late summer on, it should winter without problems.

When I was a teenager the root stocks of this plant appeared annually in big wooden crates in variety stores. Several connected storage roots, each about the size of a big carrot, made up each plant. These quickly grew into yard wide clumps of foliage topped by two-foot stems of the pink trumpet blooms. The single root from which the plants in the image  was grown was no bigger than one of my fingers: a sign of the times and current shipping costs no doubt.

Those blooms have a neat trick: the stigma of this plant has two flaps - if you touch the stigma (as an insect depositing pollen might) the two flaps slowly close over the stigmatic surface, thus protecting any pollen which might have been deposited. Take the kids over to watch this little performance.
Posted by McWort at 10:02 AM