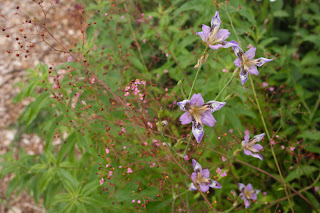 A great combination, yes, but you probably won't get that impression from the image above.

The plants you see above are Iris dichotoma, the vesper iris, and Talinum paniculatum, called Jewels of Opar and sometimes pink baby's breath.

I've known about Jewels of Opar for all of my adult gardening life: each year for decades there was a tiny photo of the plant in the Park Seed catalog. From the picture it was hard to get any idea at all of what the plant was like. I didn't see a growing plant until sometime in the 1980s, and then it was love at first sight. It's such a distinctive looking plant, a plant which stands out in a crowd. They've been in the garden off and on since. But three years ago there were none, and last year I picked up three little potted seedlings at the end of a plant exchange (no one else wanted them). I never planted them in the garden, and as freezing weather approached I decided to see if they would survive the winter in a cold frame. Two of the three did. Their reward is a spot in the community garden this year, where they have luxuriated into bushel basket sized clumps. They are in full bloom now and the masses of flowering stems form a dome about a yard across. The plants I had grown in the past as annuals never reached this size for me.

It was purely an accident that the vesper irises ended up beside them.  And it was purely an accident that I discovered what a splendidly serendipitous placement this is: both the irises and the talinums open their flowers in the afternoon so that by the end of the day both are in full bloom together. The photo above does not do them justice: you have to see them together in the garden. There are so many agreeably harmonious and complimentary things going on between these two that I'm having trouble resisting the urge to sneak up to the community garden to take another look.

The vesper iris is easy from seed; the Jewels of Opar is too easy - it can get a bit weedy (if you end up with too many, you can eat them).
Posted by McWort at 10:18 PM

It's funny how you can have those reseeding plants for years and years and then all of a sudden they don't come back. I just realized we haven't had Jewels of Opar for....I can't even say how long?!? We will have to start over as both of us are very fond of the little wanderer.