Lycoris, flagship of the oporanthous bulb fleet in my garden 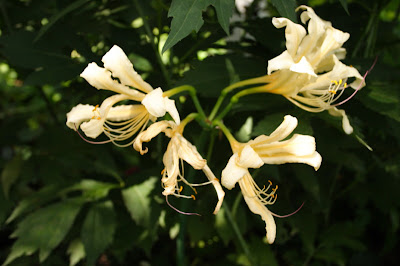 Reports are coming in about the flowering of Lycoris throughout the greater Washington, D.C. area. I think of Lycoris as the flagship of the oporanthous bulb fleet in our local gardens: they are the most glamorous of these late summer blooming bulbs. They are also fleeting in terms of their garden effect, so plant them generously and in variety to extend their garden presence.

The one shown above came as either Lycoris longituba or L. chinensis but with the caveat that some of the Lycoris longituba were yellowish. To me it suggests what I would expect from a hybrid between Lycoris longituba and Lycoris chinensis. It's roughly the same size as Lycoris squamigera. Lots of these have turned up in gardens lately, and I suspect that we are growing a hybrid swarm rather than plants which can be attributed to a particular species with certainty.
Posted by McWort at 12:36 PM