Sinningia in the garden 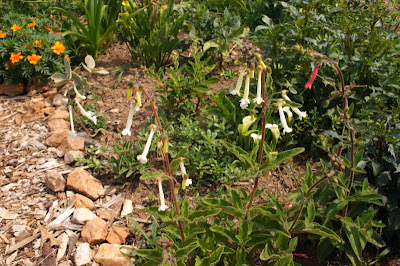 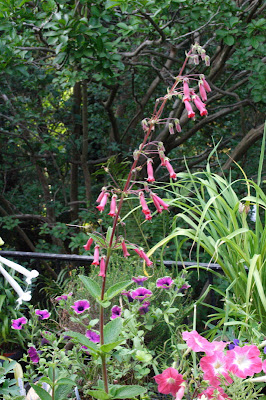 The best known member of the genus Sinningia is probably Sinningia speciosa, the gloxinia of florists and light table enthusiasts. It’s such a lush, tender looking plant that it’s no surprise that generations of cold climate gesneriad enthusiasts have coddled the plants indoors. It’s hard to believe, but these plants might have potential for use as warm-season garden plants. I planted some this year at the community garden plots; they are right out in the sun, and although they are looking lush, they are growing and now flowering. I don’t expect these to be hardy.
On the other hand, there are several other Sinningia in that same planting which might prove to be hardy – or at least hardier than we’ve expected until recently. These are Sinningia tubiflora, S. sellovii, and hybrids such as ‘Butter and Cream’, ‘Scarlett O’Hara’, ‘Towering Inferno’ and others.  This much I know from experience with them so far: they take full sun without apparent problems, they grow much more vigorously (and bloom freely) grown in the ground rather than in pot,s and some, maybe all,  increase freely from potato-like underground storage structures.
In the garden, the flowers of Sinningia longituba and ‘Butter and Cream’  from a distance look a bit like those of some sort of flowering tobacco. And Sinningia tubiflora  is fragrant. Up close, the foliage is nothing like that of Nicotiana; and I’ll bet that most garden visitors will identify them as sages or penstemons. After all, we’re not used to seeing gesneriads in the garden. The individual flowers and the way they are carried also suggest those of Phygelius.
In the images above you can see Sinningia ‘Butter and Cream’ (with S. tubiflora off to the left) and S. ‘Towering Inferno’ just getting started.
My plants came from Plant Delights Nursery in 2010; for the remainder of the 2010 season and throughout the 2011 season they remained in the pots in which they were received. They spent the winters dry in one of the cold frames. When I broke them out of the pots earlier this year I was surprised at the yield of “potatoes” in some of the pots. Soon there will be plenty of these with which to experiment.
If these prove to be hardy garden plants, they will make a nice addition to our herbaceous plantings. And if it turns out that they can’t take our winters, they are still well worth the small effort to dig them annually and store them dry during the winter.  If you don’t already have a good cold frame, get busy!
Posted by McWort at 9:58 AM