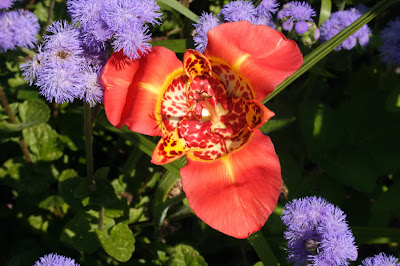 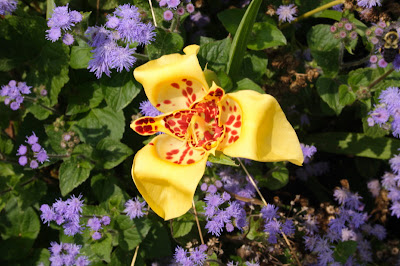 One of my community garden plots has a bed about twelve feet long and two feet wide given over to ageratum and tigridias. It's only a partial success because the tigridias (about 50 were planted) are putting in a lukewarm performance. Bloom has been scattered and meager. The bulbs planted came as a mixture, but so far the flowers have been only yellow or red - no whites, pinks or other colors.

I'll be trying this combination again because when it works - when the tigridias and the ageratums are blooming freely together - it's very striking.

The ageratums used this time are of two taller sorts, 'Leilani Blue' and 'Blue Horizon'. These are standard cut-flower versions of the plant most people know only in its dwarf edging forms. The flowers are sweetly scented, and the scent carries well on the air. It reminds me of the aroma of the candy known as Jordan almonds.