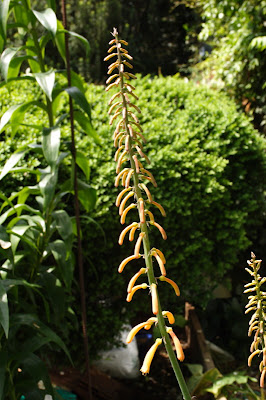 Eighteen Kniphofia are on trial this year in the home garden and  up in the community garden plots. I’ve always liked these plants for their form and color – and for the novelty of growing plants of south African origin in the garden. Many of them do seem to be reliable as garden plants in our climate. And the deer don’t seem to like them.


In the old Bailey Cyclopedia of American Horticulture there is this: “This genus includes the Red-hot Poker Plant…which is unique in its appearance and one of the most striking plants in common cultivation. No one who has ever seen its pyramidal spike of blazing red fls. borne in autumn is likely to forget when and where he 'discovered' this plant.“  Count me among those who have not forgotten. In the Silver Spring, Maryland neighborhood where I grew up few of the lots had fences. As children we ran freely from lot to lot in play. I have not forgotten the day I turned a corner of a neighbor’s house and there in front of me in full bloom was one of these amazing plants. I don’t remember how long I stood there enjoying that delightful mixture of astonishment and curiosity which occurs when I see a new, exciting plant. But I’ve never forgotten it.
These plants are nothing new in our gardens: nursery lists of a century ago describe plants which from the written descriptions could pass for some of the cultivars now sold. In the image below you can see the list of cultivars offered by Bertrand H. Farr in his 1917-1918 catalog: 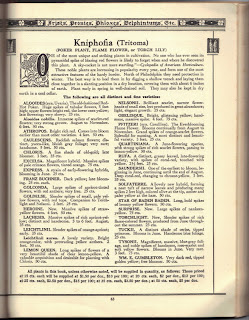 Here's an image from Daniel Foley’s Garden Flowers in Color, Macmillan Company, 1943. By now most copies have probably been de-accessioned or otherwise trashed: what a pity!  Copies of this are still available and typically inexpensive: get one! Read the text thoroughly,  and you will come away with a sense of what an ideal eastern American garden from a half century ago must have been like. Many of the old favorites are here and given loving treatment. The flowers illustrated in this image differ little from the cultivars now making the rounds. Here's the poker picture: 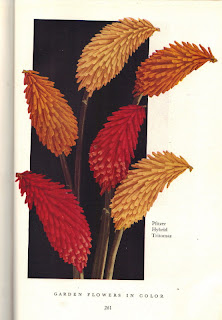 Two Kniphofia from my garden are shown here. At the top of the post is the startling K. thompsonii. The first time I saw this one I was momentarily baffled: was it a huge Lachenalia? A strange Aloë? It took a moment to realize that it was a very distinctive Kniphofia – now one of my favorites.
And here is 'Echo Rojo': 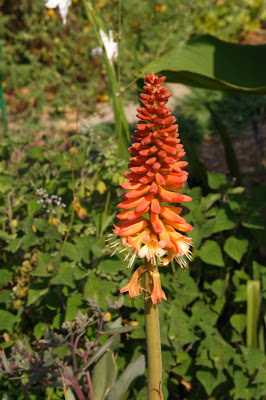 If you own rights to the Foley image or the Farr image and object to their usage here, let me know and I will remove them.
Posted by McWort at 4:14 PM