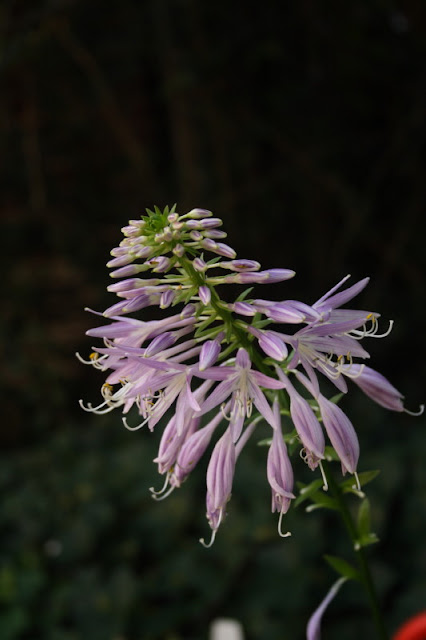 Here's the inflorescence of a hosta I picked out for its very distinctive foliage: Hosta 'Lakeside Looking Glass'. After a few months of growth, it produced another surprise, a very distinctive inflorescence. I'm not a hosta person, and I don't travel in hosta circles - in fact, I grit my teeth every time I hear the genus Hosta pronounced as it usually is: the man's name was Host, not Hast. But I can't resist the plants, in particular those with a distinctive inflorescence. Hosta 'Krossa Regal' made no impression on me until I discovered that its inflorescence can go up to five feet high. That immediately put it on the want list. The same is true of the forms of Hosta rectifolia: the tall inflorescence really intrigues me.

'Lakeside Looking Glass' is not tall, but the very compressed inflorescence is very cool looking to me. The effect is fleeting - the individual flowers are literally ephemeral under our condition (and as mentioned in an earlier post, that's why hostas were once called daylilies). The hosta crowd is focused on leaves: a Google images search turns up pages of images of leaves and few of flowers. I wonder how many other hostas there are with a notable inflorescence.
Posted by McWort at 12:22 PM