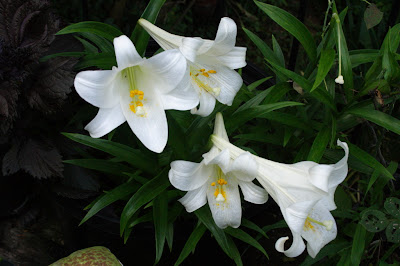 This is the lily most people in this country know as the Easter lily. That name came about as a result of the sale of blooming plants at Easter time. The timing of Easter varies from year to year, and the ease with which the flowering of this plant in greenhouses can be controlled to allow the production of blooming plants in time for that variable celebration has allowed for a successful industry built around this plant. In fact, in the past there have been small market booms around this plant somewhat like the tulip mania in the past.

The lily books tell us that this lily is native to low elevations in  the Riukiu Islands (Ryukyu) and Taiwan. Long cultivated in Japan and China, it was introduced to England from China in the early nineteenth century. Early British growers treated it as a tender plant, and at one time a thriving industry existed based on the sale of bulbs of this species grown in, of all places, Bermuda. Suspicions about its long range hardiness as a garden plant here in the eastern states persist, but as long ago as the early part of the twentieth century Griffiths was convinced of its utility as a garden plant in this region.

The plants seen in gardens probably all derive from discarded Easter lilies, and are of relatively dwarf clones grown for forcing out of season. But if you take the trouble to cross pollinate plants of different clones, you will probably get plants more variable in height. Years ago a lily friend told me about the five and six foot tall plants he had grown from seed.
Posted by McWort at 12:00 AM

I adore all lilies! We have a new plague - the red lily beatle, but aside from that and being on deer's fave list, they are the perfect bulb!