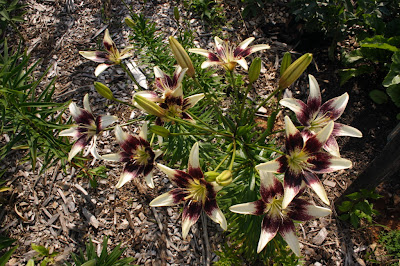 'Netty's Pride' is one of the so-called Asiatic Hybrid lilies. The name of this category preserves a bit of lily history in the sense that when the group was first named it included many hybrids raised directly (i.e. as primary hybrids) from lily species such as Lilium davidii, Lilium dauricum, Lilium amabile which are native to central and eastern Asia.  These and a few other species were thought of as a group because experience had shown that they were somewhat interfertile: thus, hybrids were possible.  However,  not all lilies which are hybrids of lilies native to central and eastern Asia belong in this category; there is another group of lilies native to that region which,  under normal circumstances, are not fertile when crossed with the so-called Asiatic lilies and their hybrids. Another name was needed for these, and these became known as the Oriental Hybrids. These are derived primarily from Lilium auratum, L. speciosum and a few other species.

A variety of modern hybridization techniques have broken down the old barriers, and there are now hybrids available in all sorts of combinations of ancestry.

'Netty's Pride' is an Asiatic Hybrid in the old sense, although it sports a color combination which not long ago would have been considered fantastic. The ones in the image above are providing a nice bit of color in the garden, but that density of color comes at the expense of a defect in the plant: in a lily show this stem would not stand a chance because the stem has produced an umbel of congested flowers. I like it, and maybe you do, too, but the judges at the show would not think much of this particular stem.
Posted by McWort at 12:00 AM