Warfare in the garden 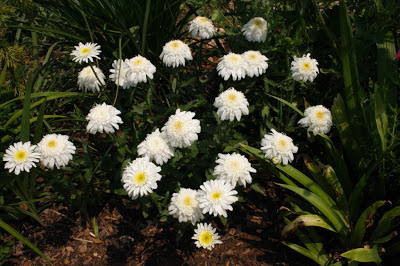 It's surprising to me how often it is a plant which keeps some memory alive for me. Shasta daisies take me back to the 1950s when my playmates and I turned a garden visit into a preparation for warfare with other neighborhood gangs. We called them "gangs" back then, but they were nothing like what are called gangs today. All the boys had vague senses of where "their" territory ended, and trespassers were apt to be dealt with. Rock fights were not unknown. Actual physical contact was all but unknown, but we had sure aim with those rocks. None of this had anything to do with drugs or associated illicit activity. It was more of a group/neighborhood identity thing.

If my gang had a name, I was never aware of it. My gang was in fact not so much a gang as it was a group which stayed together for mutual protection from the other gangs. In our travels through the local woods we were continually aware of our vulnerability.

That sense of vulnerability kept us on the lookout for ways to protect ourselves. Real weapons were out of the question: our parents would have confiscated them immediately. So we improvised with what was around us. I still remember the summer day that a garden provided me with plenty of inspiration. We were in a neighbor's garden (I'm not sure why because that neighbor had older children who because of the age difference were not our playmates). A big patch of Shasta daisies was in bloom. But that was not what caught my eye. There were also big patches of perennial pea (the plant which is idiotically called perennial sweet pea by so many), and those were full of ripening seed pods. And there were daylilies which had bloomed long before and were now sporting dry scapes.

Those daylily scapes were about a yard long and hollow. The seeds of the perennial pea were about the size of bb's (bb and pellet guns were definitely off limits to us, but every once and a while someone from outside our group would turn up with one). It didn't take long to collect a handful of pea seed ammo, and armed with the dry daylily stalks I soon had a very effective pea shooter.   We had a great time shooting each other until a horrified (as in "you might put your eye out") parent appeared and sent us all home.

That was over a half-century ago, yet every time I see Shasta daisies I remember that day. The Shastas in that garden long ago were the tall, single sorts. The one above is the cultivar 'Esther Reed', now in its second year at my little garden up on the hill.

There are already daylilies in that garden - maybe I should add a perennial pea.
Posted by McWort at 12:00 AM